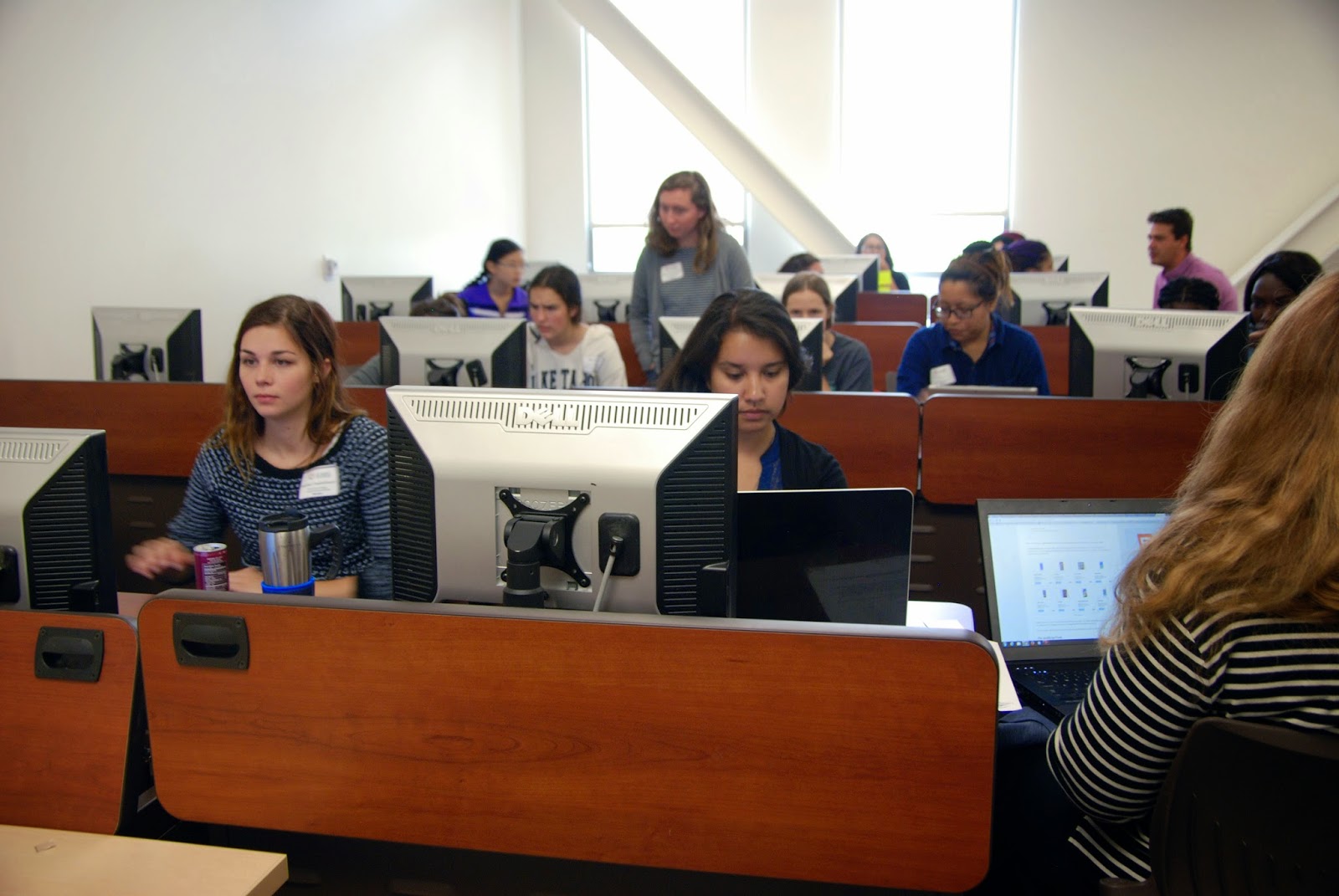 Just over 65 young women descended upon several computer labs and their adjoining classrooms at California State University San Marcos on Saturday. Yes, it was the third instantiation of the San Diego Women’s Hackathon. The event was organized and implemented so that everything appeared seamless by Dr. Youwen Ouyang, a Professor in the Computer Science Department, and Shauna Ruyle, a marketing consultant and Cal State San Marcos graduate. They were supported by approximately 10 student volunteers and 18 adult mentors, many of whom were themselves technical women.

The Hackathon has been growing at quite a clip since I wrote about the inaugural event a year ago, as witnessed in part by the growing list of sponsors, which included Intuit Corporation, Equinox Center, Girl Develop IT, 4BoneHealth and CompTIA. Students came from as away as Riverside County and the south side of San Diego proper. Grouped into teams, and given the choice of two coding tasks that aim to make the world a better place, they hit the ground running. 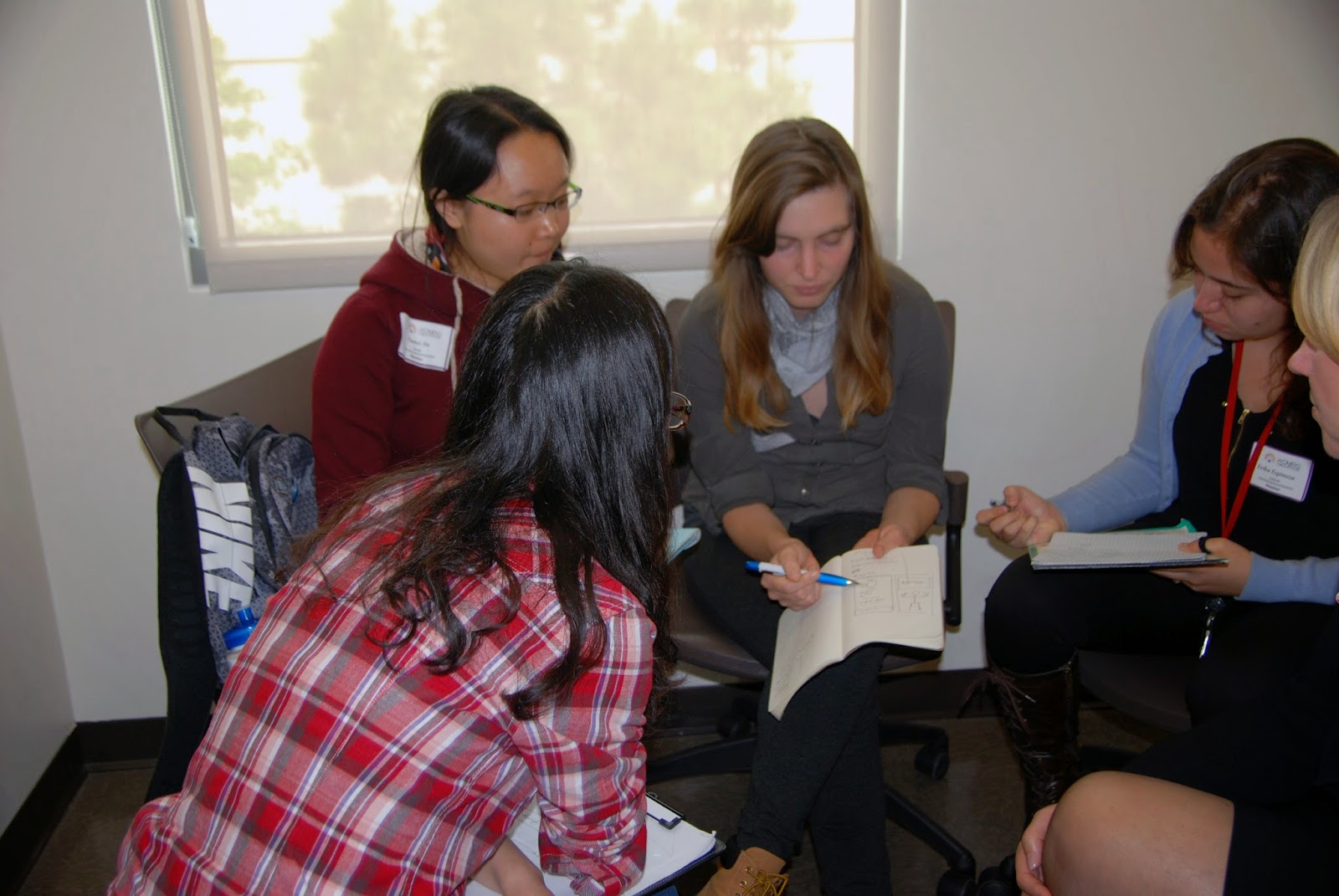 Sporting my “Media” badge I spent the day zipping around talking to the participants, student volunteers and mentors. Much of the time however, I hung out and observed the dynamics of the coders that were so noticeably different from the dynamics in the computer labs I’ve spent so many hours in over the years.

The coding challenges were supplied by two of the event sponsors: 4BoneHealth and the Equinox Center. The teams that chose the first challenge had to create an app or game to educate their peers about the importance of getting enough calcium – and how to do so. The teams that chose the second challenge had to create an app to help people learn about the current drought in southern California. As if to encourage conversation about the usual lack of precipitation, Saturday it rained all day. 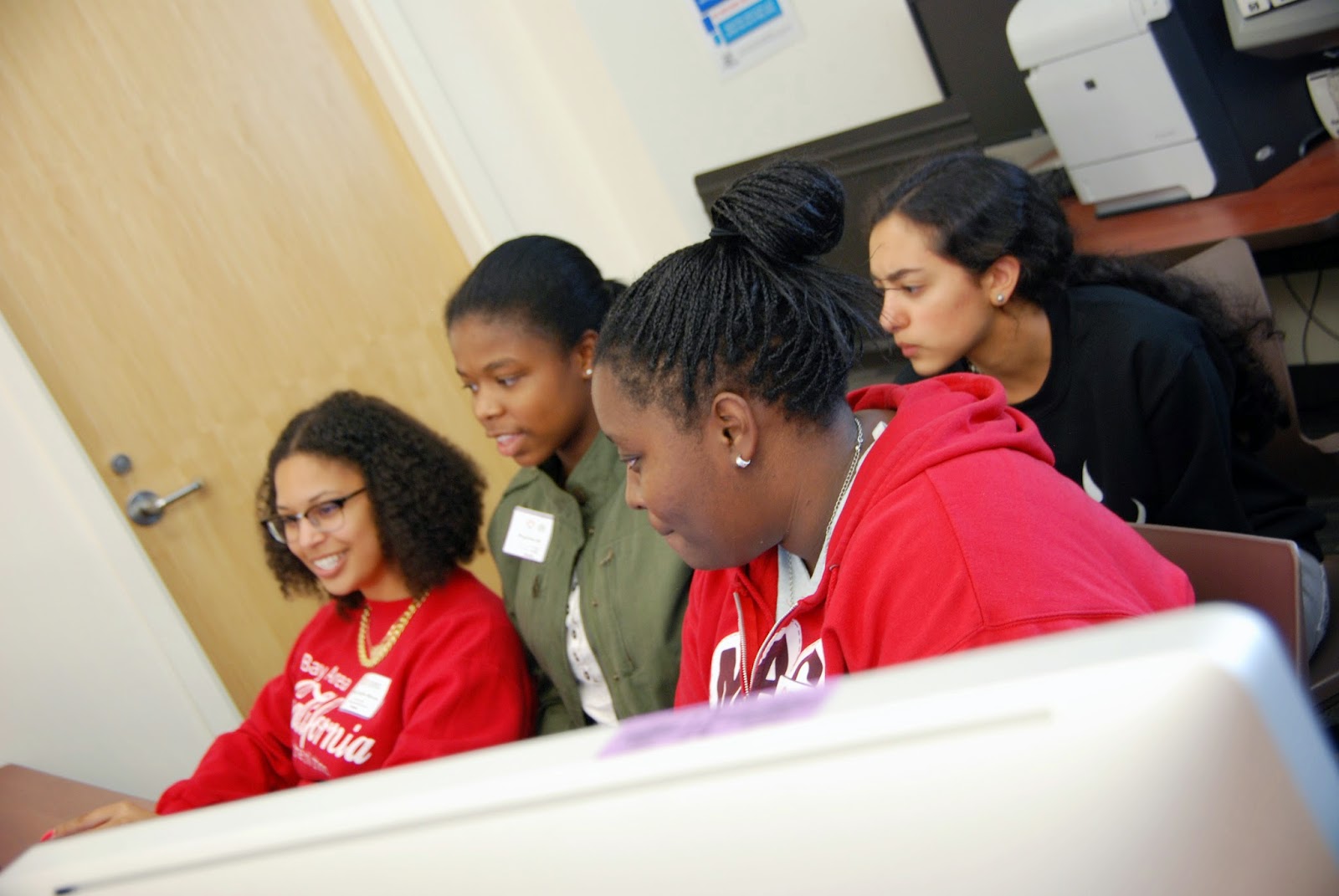 According to the official website, Hackathon participants were age 16 and up. However, I’m pretty sure I saw two girls who looked to be about 9 and 11. They were both firmly attached to mice and keyboards and one of them was right smack in the middle of a group of older participants as they all plotted and strategized. Go Girls! In addition, there were at least a few women who were returning to school to study computer science after having spent some years working in other occupations. They too were seamlessly integrated into their teams.

So why did these women decide to get up in the dark, drive as much as an hour or more in the rain to hang out on a college campus? On a Saturday? The slightly older ones had a variety of reasons, but many of the younger first time participants said things like this: “I had nothing else to do” “My teacher told me about it” “I’m going to take a class in it”. Interesting.

Would they have come today if boys had been participants too? “NO”. That much was quite clear. One of them added: “You mean to a normal one?”  Hmmm.

A few hours later, what did these same, younger first time participants have to say? “At first it made 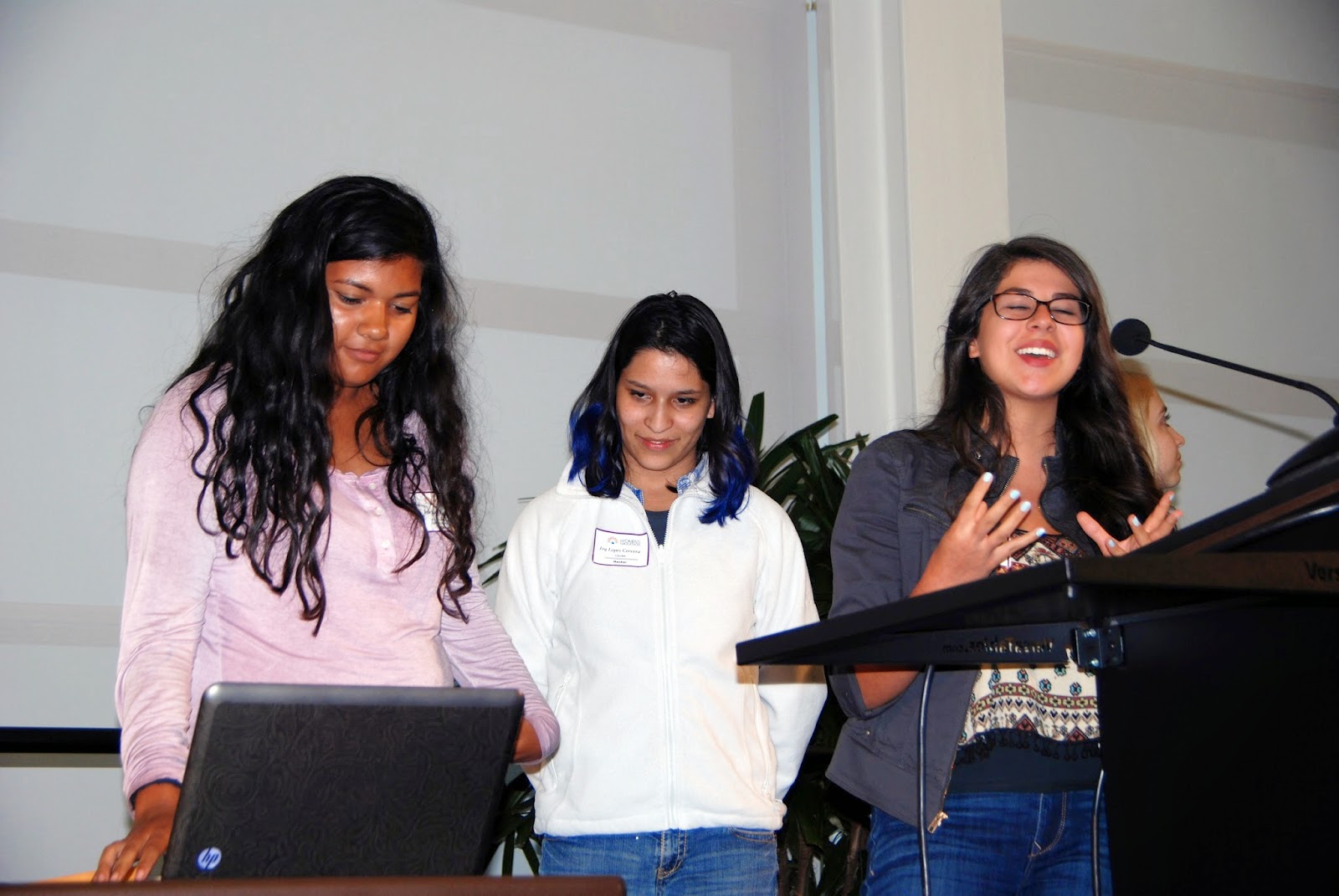 no sense, but now these lines of code make sense”. “It’s cool”. Aha…

Many of the groups spontaneously formed into organizational patterns that closely mimicked a technique known in pedagogical circles as Pair Programming. Well researched, this cooperative approach to learning to code has been shown to have many benefits for learning. Especially in many non-traditional populations. Read: women and girls. Yet, in traditional classrooms there is often resistance to Pair Programming because it defies the stereotypical solo, competitive, programmer behavior.

The vast majority of the groups I observed functioned amazingly well, without overt or even subtle power plays and jockying for dominance. I watched them resolving differences of opinion by sharing 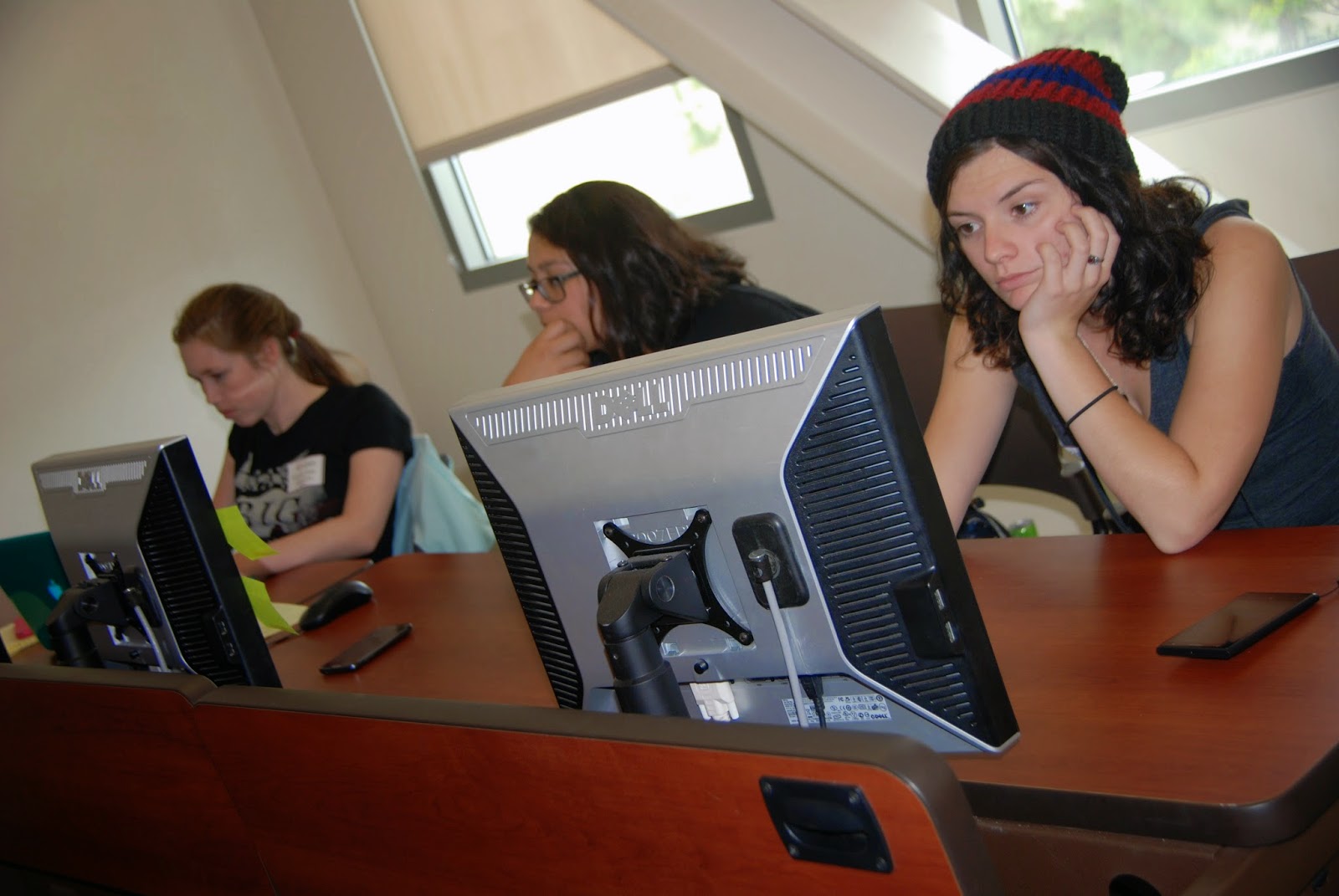 and compromising, rather than having one person aggressively attempt to take control. If you have spent any amount of time in the sometimes anti-social world of male dominated tech, you know just how unusual this can be.

There were poignant moments. I spoke with one participant who seemed a bit sad. She told me she was “passionate about everything” related to engineering and computer science and felt that she should know already what aspect of these she wanted to pursue. Mind you, this young woman was in high school. We talked for a few minutes and I hope that by the end of our conversation she was able to view her wide ranging interests as the valuable and often unique interdisciplinary perspective that it is. In our globally interconnected technical world, we need young women like her.

There is a lesson in that encounter for those of us who have “succeeded” and now want to nurture and mentor those coming along after us. 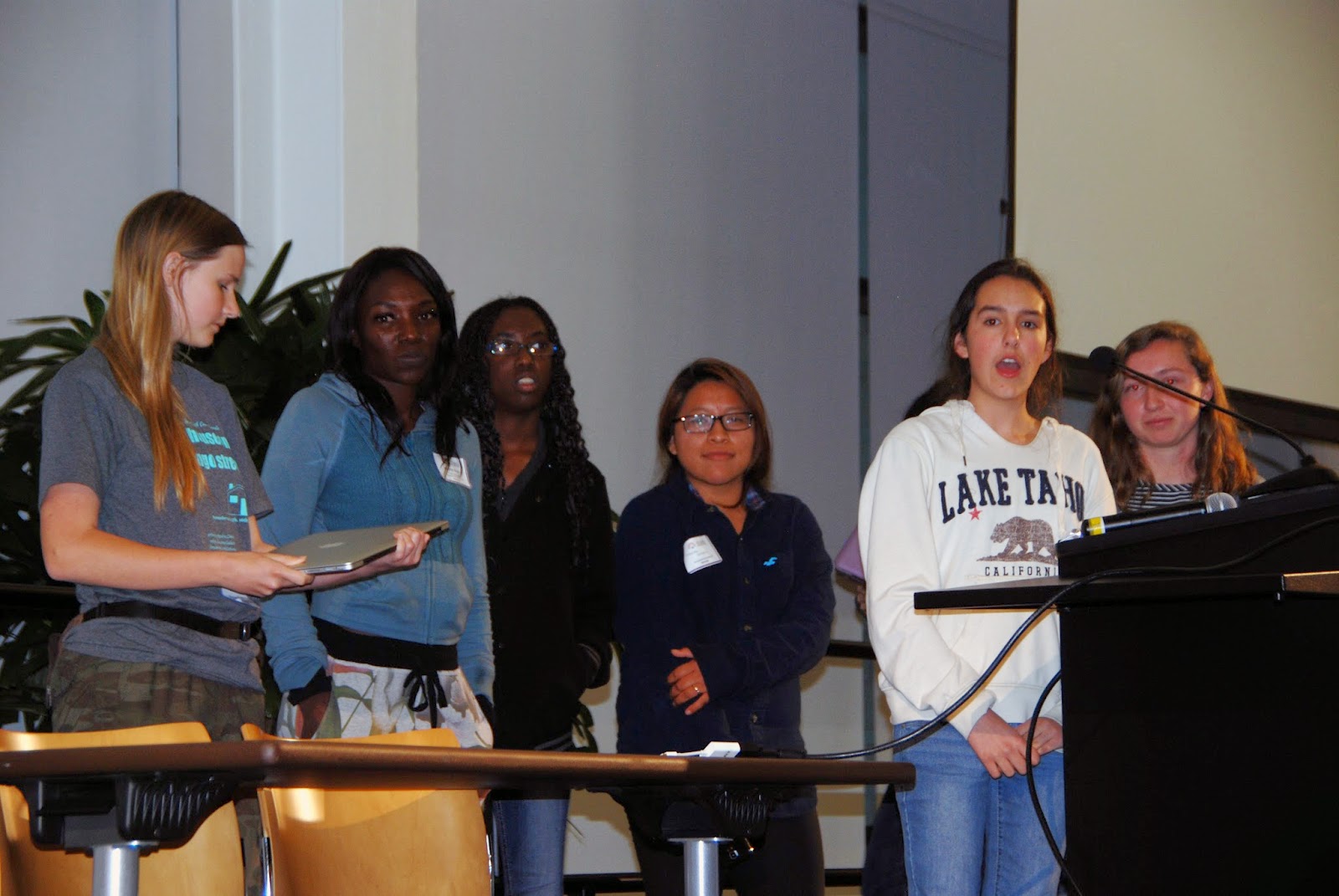 At the end of the day, everyone piled into a room to eat dinner and watch the project presentations. Each group got up on stage and made a pitch to the audience and the judges. They fielded questions from the judges about their technical choices, most difficult moments, how they resolved team challenges and why they made certain design decisions. Every group had completed a significant portion of a project, even those groups whose members had little to no prior coding experience. They were justifiably proud of themselves. I noted as well how virtually every group made sure each member presented a portion of their pitch. It had been a very long day but energy radiated from the stage.

I asked many of the participants if they would attend another hackathon? Yes…definitely, absolutely, I can’t wait. But not if boys are there. Why not? They just looked at me like I was slightly odd for even asking.

Fortunately, the next San Diego Women’s Hackathon in October is a mere 6 months away. 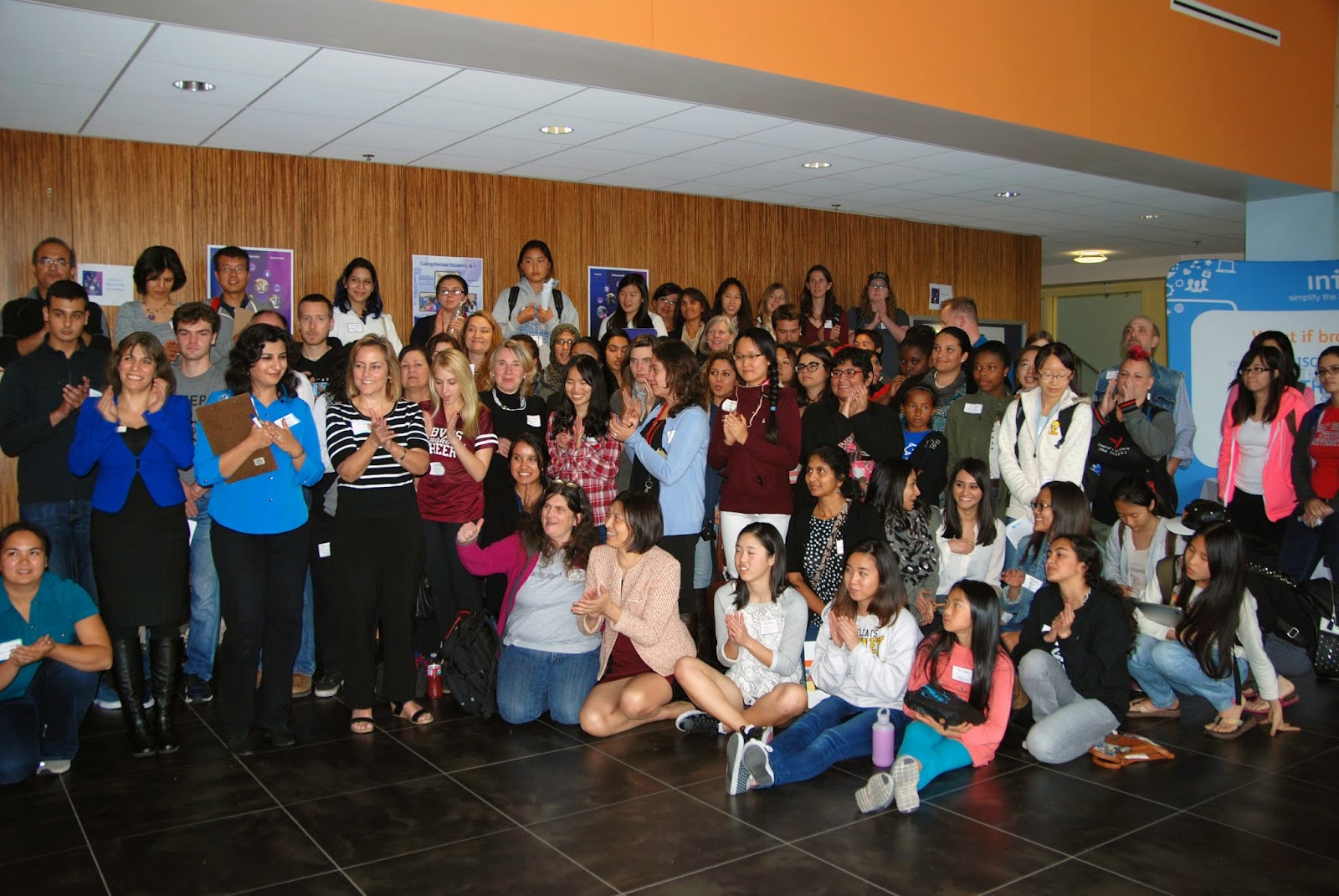